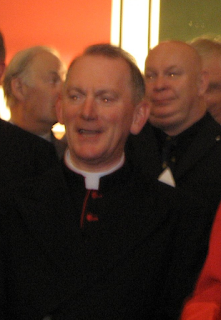 "We ask your prayers for the repose of the soul of the Chaplain of the Grand Priory, Monsignor Dr Antony Francis Maximilian Conlon, Grand Cross Conventual Chaplain ad honorem, Cross Pro Piis Meritis, who died yesterday afternoon, fortified by the Rites of Holy Mother Church.

Dr Conlon joined the Order as a Donat of Devotion in 1971, he became a Chaplain in 1980 following his ordination to the Sacred Priesthood, and was appointed Chaplain of the Grand Priory of England at its restoration in 1993, thus the first Chaplain since the Reformation, a post he has held for the last 27 years. He was appointed Grand Cross in 2015.

Educated at the Royal English College in Valladolid and the Venerable English College, Rome, he held a Licence in Church History from the Pontifical Gregorian University in Rome. His PhD, undertaken at Heythrop College, "What Ceremony Else", was on the English Marian Restoration.

He was priest of Westminster Diocese, ordained by Cardinal Hume. Following parish ministry in London, and after a long spell as Chaplain to Newman's Oratory School, Reading, where he made innumerable converts to the Faith, including a future priest, he was Parish Priest of Goring-on-Thames, in the Archdiocese of Birmingham, at the time of his death.

Please pray also for his family.

Posted by Young Catholic Adults at 08:42