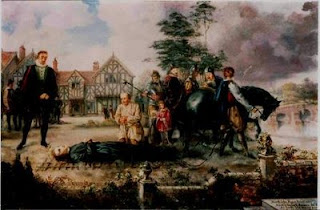 If we think that things are bad in the Church at the moment, with Priests (and even Bishops) openly disobeying the will of the Holy Father etc. then just spare a thought for our spiritual forefathers. Their problems were nigh on insurmountable, but they displayed a courage and strength of faith that would put us to shame. Two such forgotten heros are Blessed John Sugar and Blessed Robert Grissold.
Blessed Robert Grissold (or Greswold) came from a village called Rowington, which is approximately 2 miles from Baddesley Clinton, which is a small village in Warwickshire.

The Grissold’s were devout Catholics in a troubled time, because in the early 1600’s in England, it was against the law for anyone to attend Mass. Instead they were forced to attend vernacular communion services, introduced by Archbishop Cramner (a few years earlier), which were very different to the Traditional Latin Masses that Catholics were used to. For a start the service was entirely in English, the pastor faced the congregation, any references the Mass as a sacrifice had been banished and there were vernacular hymns sung throughout the ceremony to emphasise the communal sense of the service. Stained glass windows and images had either been destroyed or whitewashed over; and Communion was offered under both kinds, inline with the Hussite and Protestant belief , which maintained that Communion under both kinds was necessary for salvation.
In 1603 the authorities were searching for Priests, who because of the impossible legal situation, led double lives, often taking on alias names and hiding for hours in secret hiding places (constructed in houses) called Priest holes.
On Sunday, 8th July, Robert Grissold was found on a road near Baddesley Clinton House, a place notorious for ‘popery’, with Father John Sugar – it is quite possible that Fr. Sugar had just come back from celebrating Mass. Both Fr. Sugar and Robert Grissold were arrested and then imprisoned in Warwick Gaol for one a year.
On 13th July 1604 John Sugar was convicted of being a Catholic Priest and was condemned to be hung drawn and quartered, which was the punishment for being a Priest in England at that time. Robert Grissold was told that he would be freed if he would recant and attend the communion services of the Established Church , at one point an exasperated Justice shouted at him ‘Grissold, Grissold, go to Church or else thou shalt be hanged’. He refused to accept this and was found guilty of being in the company of and of assisting a Catholic Priest. Being a layman he was sentenced to be hung.
On 16th July 1604 both men were taken to a place called Gallows Hill - to their execution. Both prayed in Latin before courageously meeting their death in the most horrific manner . Blessed John Sugar was hung first and then Blessed John Grissold who told the multitude (who had come to watch the execution) ‘Bear witness, good people, that I die here not for theft, nor for felony, but for my conscience.’ Fr. Sugar’s head and quarters were hung on the gates of Warwick, while Blessed Robert Grissold was buried beneath the gallows.

Blessed John Sugar was 42 years old and Robert Grissold was just 29 years of age. They were beatified by Pope John Paul II in 1987.
Posted by Young Catholic Adults at 07:17