Young Catholic Adults in the Universe Newspaper for the First Time 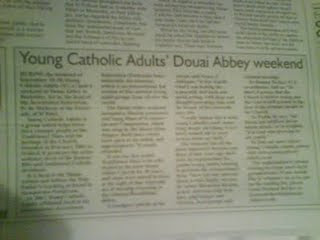 A few weeks ago YCA managed to get into the Universe for the first time (18th October)!

For a snapshot of the article, please see below:-

During the weekend of the 18-20 September, Young Catholic Adults (YCA) held its annual weekend retreat at Douai Abbey in Berkshire in the south of England. It was by far the biggest YCA event so far, with three Masses in the Extraordinary Form, three talks and a Marian procession over the long weekend.

The retreat was led by the head of the Juventutem Federation, Fr Armand de Malleray FSSP. Some participants stayed for the whole weekend, while others came for the day to the Marian Procession and Sung Mass of St Januarius and Companions, which was sung by the Douai Abbey Singers. Both these events were open to the public and attracted approximately seventy people; moreover, the Mass of St Januarius was the first public Traditional Mass to be celebrated in the main Douai Abbey church since the liturgical changes of 1969.

One of the retreatants wrote: “well, it‘s been over a week since the retreat and I just thought I’d like to express my gratitude to .... Fr De Malleray and all those involved. I really appreciated the retreat itself, and the effort everyone put in. The retreat was exactly what I was looking for, a peaceful, laid- back and social setting, deep and thought-provoking talks, and the absolute beauty of the Extraordinary Form of Mass. I really believe this is what young Catholics need, something deeply enriching. It certainly helped me to be a bit more serious about my Faith! I feel really great as a result of the retreat; and having met all the other great people there was fantastic, it gave me the real sense of being part of something huge, the Church.”

YCA is always looking to create more local groups/events. If you would like to volunteer or be put on the mailing list, please email Damian Barker at juventuterncatholicam@yahoo.co.uk

Please join Aid to the Church in Need for the Annual Memorial Mass for our Departed Benefactors and Friends with a sung Latin Mass (1962 Missal) at 7pm on Thursday, 26th November, Celebrant, Father Martin Edwards, at the Little Oratory, Brompton Road, SW7 2RP
Posted by Young Catholic Adults at 10:42 No comments: