Timetable of events for the Douai Retreat

Daily Schedule of Meal Times at the Abbey Refectory


DOUAI WEBSITEhttp://www.douaiabbey.org.uk/index0.htm
Posted by Young Catholic Adults at 10:53 No comments:

This summer there is an Evangelium Conference for young adults (18-35), sponsored by the CTS, at Fawley Court, Henley-on-Thames from 8-10 August. Speakers include Fr John Saward, Fr Thomas Crean OP, Fr Jerome Bertram of the Oxford Oratory, and the British Catholic blogosphere's very own Auntie Joanna. Cost is £85 for the weekend but places are limited to 100 so you need to book early if you want to go.H/T to Rationabile Obsequium and H/T to Fr. Tim Finnegan http://the-hermeneutic-of-continuity.blogspot.com/
Posted by Young Catholic Adults at 12:17 No comments: 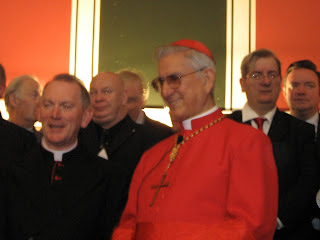 It was an early start, I got on the 7.43 train from Gloucester, but nevertheless I was looking forward to the day ahead. What was I going to ? The Pontifical Mass at Westminster Cathedral celebrated by one of the Pope’s closest advisers His Eminence Cardinal Castrillion Hoyos. The train arrived in Paddington Station on time – unusually; and then I ambled to Westminster Cathedral. I had been to this Mother Church of all the Catholics in England and Wales many times before, and never before had I seen it to be full.
With about 45 minutes to go, I decided to take my seat; however, a momentous site beheld my eyes, it was difficult to find a place. This was indeed an extraordinary phenomenon, people were standing at the side and the back and there was a palpable feeling of awe and excitement in the congregation. Just before the Mass Cardinal Hoyos had address the LMS AGM and what he said there was just too amazing to believe, it was really rather difficult to take it all in.
At the Press Conference beforehand the Cardinal said :-

The Catholic Herald: So would the Pope like to see many ordinary parishes making provision for the Gregorian Rite?
Cardinal Hoyos: All the parishes. Not many – all the parishes, because this is a gift of God. He offers these riches, and it is very important for new generations to know the past of the Church. This kind of worship is so noble, so beautiful – the deepest theologians’ way to express our faith. The worship, the music, the architecture, the painting, makes a whole that is a treasure. The Holy Father is willing to offer to all the people this possibility, not only for the few groups who demand it but so that everybody knows this way of celebrating the Eucharist in the Catholic Church.
The Catholic Herald: On that note, would you like to see all the seminaries in England and Wales teach the seminarians how to celebrate in the Extraordinary Form?
Cardinal Hoyos: I would like it, and it will be necessary. We are writing to the seminaries, we are in accord that we have to make deep preparation not only for the Rite, but for [teaching] the theology, the philosophy, the Latin language …
The Catholic Hearald: What would be the practical steps for ordinary parishes [to prepare for the Gregorian Rite]?
Cardinal Hoyos: If the parish priest selects an hour, on Sundays, to celebrate the Mass, and prepare with catechesis the community to understand it, to appreciate the power of the silence, the power of the sacred way in front of God, the deep theology, to discover how and why the priests represents the person of Christ and to pray with the priest.
The Tablet: I think many Catholics are rather confused by this new emphasis on the Tridentine Rite, mainly because we were taught that the new Rite represented real progress, and many of us who have grown up with it see it as real progress, that there are Eucharistic ministers, women on the sanctuary, that we are all priests, prophets and kings. This new emphasis to many of us seems to deny that.
Cardinal Hoyos: What is progress? "Progredire", means [offering] the best to God… I am surprised, because many young people are enthusiastic with the celebration of the Gregorian Rite …
The Tablet: In the Motu Proprio, the Pope's emphasis is on one Rite and two forms, and he describes the Tridentine Rite as "extraordinary". Extraordinary therefore means exceptional, not something that we celebrate every Sunday.
Cardinal Hoyos: Not "exceptional". Extraordinary means "not ordinary", not "exceptional."
The Tablet: Should it therefore supersede the new Rite? Should we go back?
Cardinal Hoyos: It is not going back: it is taking a treasure which is present, but was not provided. … But it takes time. The application of the reforms of the Second Vatican Council took years. It takes time to understand the deep profundity of the old Rite. The Holy Father is not returning to the past; he is taking a treasure from the past to offer it alongside the rich celebration of the new Rite. The second Eucharistic prayer of the new Rite is actually the oldest one [in the Church’s entire liturgy]. It’s not a matter of confrontation but of fraternal dialogue.
The Catholic Hearald: What about the "stable group"?
Cardinal Hoyos: It's a matter of common sense … In every bishop's household there are maybe three or four persons. This is a stable group … It is not possible to give two persons a Mass, but two here, two there, two elsewhere – they can have it. They are a stable group.
The Catholic Hearald: From different parishes?
Cardinal Hoyos: No problem! This is our world. Managers of enterprises don’t live in one place, but they are a stable group.
(H/T Damian Thompson from the Blog Holy Smoke)
Posted by Young Catholic Adults at 12:08 No comments: