Today is the First Saturday of the month of  July, so perhaps it is time to think about the First Five Saturdays Devotion . As http://catholicismpure.wordpress.com eloquently states:-

“I promise to assist at the hour of death, with the graces necessary for salvation, all those who, on the first Saturday of five consecutive months shall confess, receive Holy Communion, recite five decades of the Rosary, and keep me company for fifteen minutes while meditating on the mysteries of the Rosary, with the intention of making reparation to me.”

It may come as some surprise that this devotion of the first five Saturdays, requested by Heaven through Sister Lucia of Fatima in 1925 at her convent in Pontevedra, was not new; in fact it is an ancient custom in the Church! It fits precisely into the long tradition of Catholic piety that, having devoted Fridays to the remembrance of the Passion of Jesus Christ and to honouring His Sacred Heart, found it very natural to devote Saturdays to His Most Holy Mother.

It is sometimes asked why Our Lady asked for Communions of reparation on five first Saturdays, instead of some other number. On 29th May, 1930 Our Blessed Lord explained to Sr. Lucia in another apparition to her that it was because of five kinds of offenses and blasphemies against the Immaculate Heart of Mary, namely: blasphemies against her Immaculate Conception, against her perpetual virginity, against the divine and spiritual maternity of Mary, blasphemies involving the rejection and dishonouring of her images, and the neglect of implanting in the hearts of children a knowledge and love of this Immaculate Mother.

“My soul waits for the Lord more than watchmen for the morning” (Psalm 130:6)
It is also an age-old tradition that Jesus appeared to Mary on the Saturday, the day after His death, whilst the world lay in hushed waiting for the Resurrection. The great theologians of the 12th and 13th centuries, Sts. Bernard, Thomas and Bonaventure, explained the dedication of Saturdays to Mary by pointing to the time of Christ’s rest in the grave. Everyone else had abandoned Christ; only Mary continued to believe, demonstrating her deep faith by never doubting for a moment her Son’s promise of Resurrection. This was her day!

St Peter Damian, one of those who most aided the spread of Mariology in the eleventh century, expresses the same thought in the following manner: “Sabbath signifies rest, for one reads that God himself rested on that day. Is it not then fitting that the same day should be dedicated to the Blessed Virgin, in whom the divine Wisdom chose its abode, and rested as on a couch of holiness?”
The liturgical books of the ninth and tenth centuries containing Masses in honour of Mary on Saturday were largely the work of Alcuin (735-804), the Benedictine monk who was “Minister of Education” at the court of Charlemagne and who contributed in a decisive manner to the Carolingian liturgical reform. Alcuin composed six formularies for Votive (i.e. devotional) Masses – one for each day of the week. And he assigned two formularies to Saturday in honour of Our Lady. The practice was quickly and joyously embraced by both clergy and laity.

There were several theological reasons for dedicating this day to Mary. A 15th century missal gives
several of those reasons in a hymn: Saturday is the day when creation was completed, therefore it is also celebrated as the day of the fulfillment of the plan of salvation, which found its realisation through Mary. Sunday is the Lord’s Day, so it seemed appropriate to observe the preceding day as Mary’s day. In addition, as Genesis describes, God rested on the seventh day, Saturday. The seventh day, and the Jewish Sabbath, is Saturday; we rest on Sunday, because we celebrate the Resurrection as our Sabbath Day. In parallel, Jesus rested in the womb and then in the loving arms of Mary from birth until she held His lifeless body at the foot of the Cross; thus the God-head rested in Mary.
St. John of Damascus (d. 754) writings testify to the celebration of Saturdays dedicated to Mary in the Church of the East. 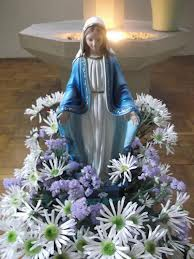 Down through the centuries the Marian Saturdays were expressed in several local devotions. This was the day the faithful selected to go on pilgrimages. Sodalities held their meetings on Saturdays and called them Fraternity Saturdays or Sodality Saturdays. The seven colours or sorrows of Mary were in some places commemorated on seven consecutive Saturdays. The 15 Saturdays before the liturgy in honour of Mary as Queen of the Rosary, 7th October, recalled the fifteen decades of the rosary; in some areas this was the day that the crops and harvests were blessed and celebrated. An Irish version of the Saturday devotions to Mary is known as the Fifteen Saturdays of the Rosary. The devotion consists in receiving Holy Communion and saying at least five decades of the Rosary sometime during the day or evening on fifteen consecutive Saturdays or to meditate in some other way on its mysteries.

The devotion in honour of the Immaculate Conception by the Franciscan Order has also contributed to furthering this pious custom of “the Marian Saturdays”.

H/t to http://catholicismpure.wordpress.com.
Posted by D at 04:59 No comments: