Our Lady of Good Success, in Quito, Ecuador 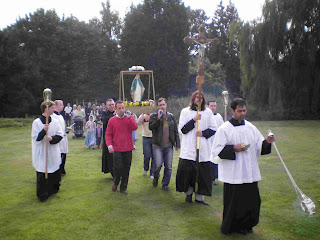 All ages/Parishes/Church groups are warmly welcome to attend Masses and the procession. All events are organised by Young Catholic Adults (YCA).


If you are in the 18-35ish age range, there will also be a retreat led by Fr. De Malleray FSSP (head of the international Juventutem Federation) at Douai Abbey 14-16th September 12.’ Gregorian Chant Workshops will be running this year led by the Schola Gregoriana of Cambridge.


How to Book for the retreat


Prices range from £5-51. To reserve your place FOR THE WEEKEND (no deposit needed if you are coming for the day on Saturday), please contact the Guestmaster direct and send a 20 pound deposit (non- returnable) to Brother Christopher Greener OSB :, Douai Abbey, Upper Woolhampton, Reading, Berks. RG7 5TQ (Tel: Tel : 0118 971 5399 Email : guestmaster@douaiabbey.org.uk ,  please see:-http://www.youngcatholicadults.co.uk/ for more details.
Posted by Young Catholic Adults at 11:11 No comments: