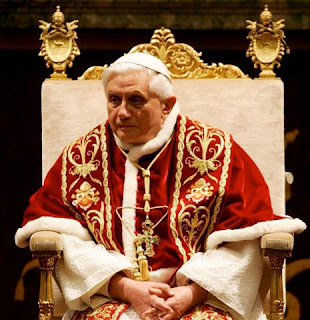 People going to the Juventutem Conference Organised by Young Catholic Adults at Douai Abbey 10-12th September, will be encouraged to offer up their prayers for the Pope, in light of his forthcoming trip to the United Kingdom (the week after). It looks as though Pope Benedict will be in for a hard time in Britain, with threats of arrest and protest looming over the visit. The event has been full of difficulty, with pilgrims being asked to pay to see the Pope; moreover, there have been many criticisms of the way it has been organised. The British Government has had to take over much of the organisation, to save the visit from faltering badly.There are still a few places left in for people aged 18-35ish, if they would like to attend for the whole weekend.

Alternatively, there is a Sung Mass (Extraordinary Form) at 11am on Saturday 11th September in the main Abbey Church and a subsequent Marian Procession c. 12pm (again on Saturday 11th September), which are open to the general public (all ages). There will also be talks, Confession, Rosaries and Socials throughout the weekend. For more information, please see http://www.youngcatholicadults.co.uk/news.htm for more details.
Posted by Young Catholic Adults at 12:33 No comments:

Protect the Pope.com is a new website which counters attacks on Pope Benedict’s reputation and integrity, and provides information and resources for Catholics to respond to incidents that constitute incitement to religious hatred.

At the launch of Protect the Pope.com Rev Nick Donnelly, a permanent deacon of Lancaster Diocese who set up the site, said:

‘Its been said that anti-Catholicism is the last acceptable prejudice, and in a way we Catholics have colluded in this by ignoring it, hoping it will go away. But the personal attacks on Pope Benedict in the run up to the Papal visit show us its not going away.

Since 2006 we’ve had the legal right to protect ourselves from religious hatred. Of course people in this country have freedom of expression, but this does not mean they have the right to create a climate of hostility and fear. It’s a question of protecting our human rights to freedom of belief and freedom of worship.’

The website gives information on the law regarding hate crime and provides Catholics with the means to report to the police incitement to religious hatred or acts of religious hatred which take place during the Holy Father’s visit. The website also has an anti-Catholicism log tied into its news feed to help raise awareness of anti-Catholic prejudice.

H/t to Fr. Tim Finnigan at http://the-hermeneutic-of-continuity.blogspot.com/
Posted by Young Catholic Adults at 11:40 No comments:

The English is rough and ready in the following but the meaning is crystal clear!

Bishop Fellay says, " the Holy Father celebrates the old Mass privately" and that an Italian Bishop has said he will leave the Church if he celebrates it publicly. Bishop Fellay said this in a speech at the 2010 priestly ordinations.

(Kreuz.net) Pope Benedict XVI. And his secretary George Gaenswein celebrate the old Mass. This is according to the General Superior of the Society of Pius X, Bishop Bernard Fellay, in a speech in the 8th of July in the Brazilian city of Bahia. [I wonder if the Holy Father also serves at his secretary’s Mass. That would not surprise me in the least. He is the sort of humble fellow who would do such a thing.]

You can listen to the speech on the page ‘4shared.com’ under user ‘fbmvm’.

This celebration will not be done because of inner-Church resistance against the old Mass.Msgr Fellay also mentioned in his talk an example of the battle against the Roman Rite.At a priest conference in Italy reported a priest, that his bishop had threatened to leave the church if the Pope ever publicly said the old Mass. [Arrivederci, Eccellenza Reverendissima!]

Msgr Fellay: "The Bishop leads a war against the old Mass."

Simultaneously, he sees a line of good Bishops and priests, At least the heart is in the right place said Bishop Fellay about Benedict XVI., that he has a Catholic heart and loves tradition, but suffers from a progressivist understanding.

Benedict XVI. is trying to save the Vatican Council at any price.

The Bishop also said that part of the Roman Curia and the neoconsevative led State-Secretariat have torpedoed traditional initiatives of the Pope. As an example the Bishop described the traditionally restored Trappist Abbey of Mariawald in the German Alps. The Pope had already permitted them to return to the old discipline and liturgy. Actually the secretary of State has intentionally set the Decree aside. [I believe that.]

Indeed the Bishop sees also that there are a great number of Prelates in the Curia who are well-disposed to the Society Pius X. In the Cathedral of St. Peter’s there are 20 old Masses celebrated daily. [Maybe not 20 every day, but there are quite a few.]

Three Examples for the Decline

Finally, Msgr Fellay illustrated the decline of the Church since the Vatican Council with a few examples. He cited a chancellor of the Diocese of Trier. He has made known that 80% of the priests in the diocese deny the real presence of Christ in the Host. [I doubt that.] In the Diocese Langres in north-east France every priest is entrusted with 60 parishes. [60? Prove it.]

In the United States the number of religious men and women have shrunken to 10% of their original numbers. [That can’t be right.]
Kreuz.net has the details.

And remember: Benedict XVI is the Pope of Christian Unity!
(H/t to Fr Z from WDTPRS - Fr. Z's comments are in red).
Posted by Young Catholic Adults at 14:20 No comments: 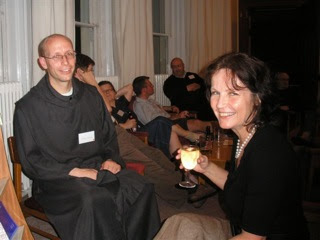 H/t to Fr. Ray Blake, who speaks for a very large proportion of the Church in the UK, who are exasperated by the Catholic Establishment in this country. He states:-

"Professor Tina Beatie, Professor of Theology and Religious Studies at Roehampton University, is part of our English Catholic establishment; she is a Tablet board member! She also wrote that pro-abortion piece a few weeks ago that appeared in the establishments house paper.

Today she sends an open letter to the Pope expressing indignation at the recent clarification by the CDF on the ordination of women. She writes:

Today, I am ashamed to be Roman Catholic. It has become a Church blighted by ignorance, arrogance and the decadence of a dying regime mired in its own obsessive clinging to power.

There was recent interview somewhere by a senior cleric bewailing the Catholic Church being ...err Catholic. It is a bit strange that the "establishment" is in rebellion, forming a Church within a Church. The basis of Catholicism isn't proposiotional or clausal it is actually based on believing and professing "... all that the holy Catholic Church teaches, believes and proclaims to be revealed by God".
You see, what some just don't get is that Catholic just isn't Anglican. The Catholic Church just doesn't have the authority to suddenly decide to change its teaching. The Professor might well be right that many Catholic women have actually left the Church and become Anglicans, the truth is they have really stopped believing that the revelation of God is at the Church's very heart. The problem she has, and many in the establishment have, is really one of authority: ultimately, did Jesus lie when he promised to be with the Church until the end of time?"
Posted by Young Catholic Adults at 15:17 No comments:

A year ago a new film about Fatima came out called The 13th Day. The film opened in the USA in October, and it is now available to order in the UK via Amazon!! Any film promoting Fatima seems like a good idea to me, so why not go out and buy it today!!
Posted by Young Catholic Adults at 12:24 No comments: