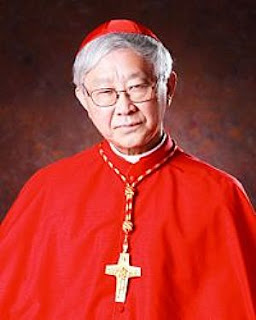 Again the blog Rorate Coeli reports that….”The hype of the official religious press would lead us to believe that only a few activists and some old senile folks are disposed to traditional forms of the Roman Rite ... Each day brings evidence to the contrary. Today that evidence comes from China. We’ve learned that His Excellency Joseph Cardinal Zen Zekiun, bishop of Hong Kong, wished to celebrate his final Pontifical Mass on April 15, 2009 - less than eight days ago - in the extraordinary form of the Roman rite. This is how the Cardinal wanted to demonstrate his commitment to the liturgical form in China which has nourished numerous martyrs of the Faith.

The Cardinal, who is known for his frankness, also told the many journalists who attended the ceremony that he now wanted to devote part of his retirement life to the faithful who are attached to the traditional liturgy of the Church.” (H/t to http://rorate-caeli.blogspot.com).
Posted by Young Catholic Adults at 09:40 2 comments:

From Rorate Coeli (h/t to http://rorate-caeli.blogspot.com). Rorate states. “In his latest Letter to Friends and Benefactors (in French, dated April 15, 2009), the Superior General of the Priestly Fraternity of Saint Pius X (FSSPX / SSPX), Bishop Bernard Fellay, after some strong words about those enemies of the Church (inside and outside Church institutions) who have been trying to undermine the Pope's efforts of reconciliation, proposes another Rosary Crusade, much larger than the other two previous Crusades.”

"It seems to us that the moment is come to launch a substantial offensive, deeply anchored in the message of Our Lady at Fatima, in which she herself promised the happy ending, for she announces that, in the end, her Immaculate Heart will triumph. It is this triumph that we ask her, by the means that she herself requests, the consecration of Russia to her Immaculate Heart by the Supreme Shepherd and all the bishops of the Catholic world, and the propagation of the devotion to her Dolorous and Immaculate Heart. It is for this that we wish to offer her, with this purpose, from now to March 25, 2010, a bouquet of 12 million Rosaries, as a crown of as many stars around her, accompanied by an equivalent sum of daily sacrifices that we may be able to fulfill most of all in the faithful accomplishment of the duties of our state of life, and with the promise to propagate the devotion to her Immaculate Heart."
Posted by Young Catholic Adults at 09:31 No comments: A flyer for the for next summer Juventutem gathering in France has just been sent to me. It will take place on August 18-23, 2009. Plan ahead and make sure you will be with us during this wonderful week in one among the most ancient Marian shrines in the world. Come and venerate the famous "Black Madonna", come and attend beautiful liturgies, meet young adults from various countries motivated by the Roman traditions of the Church, improve your Catholic knowledge through sound lectures and explore the breathtaking volcanos landscape of the "Massif Central". Contact: http://www.juventutem.org/.

Posted by Young Catholic Adults at 09:18 No comments:

The Feast of Easter as Described by the The Catholic Encyclopedia (1917). 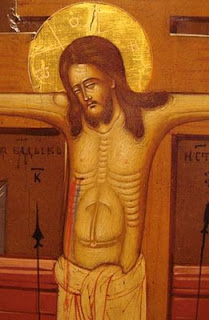 Easter is the principal feast of the ecclesiastical year. Leo I (Sermo xlvii in Exodum) calls it the greatest feast (festum festorum), and says that Christmas is celebrated only in preparation for Easter. It is the centre of the greater part of the ecclesiastical year. The order of Sundays from Septuagesima to the last Sunday after Pentecost, the feast of the Ascension, Pentecost, Corpus Christi, and all other movable feasts, from that of the Prayer of Jesus in the Garden (Tuesday after Septuagesima) to the feast of the Sacred Heart (Friday after the octave of Corpus Christi), depend upon the Easter date.... The connection between the Jewish Passover and the Christian feast of Easter is real and ideal. Real, since Christ died on the first Jewish Easter Day; ideal, like the relation between type and reality, because Christ's death and Resurrection had its figures and types in the Old Law, particularly in the paschal lamb, which was eaten towards evening of the 14th of Nisan….The connection between the Jewish and the Christian Pasch explains the movable character of this feast. Easter has no fixed date, like Christmas, because the 15th of Nisan of the Semitic calendar was shifting from date to date on the Julian calendar.

The First Council of Nicaea (325) decreed that the Roman practice should be observed throughout the Church. But even at Rome the Easter term was changed repeatedly. Those who continued to keep Easter with the Jews were called Quartodecimans (14 Nisan) and were excluded from the Church. The computus paschalis, the method of determining the date of Easter and the dependent feasts, was of old considered so important that Durandus (Rit. div. off., 8, c.i.) declares a priest unworthy of the name who does not know the computus paschalis. The movable character of Easter (22 March to 25 April) gives rise to inconveniences, especially in modern times. For decades scientists and other people have worked in vain for a simplification of the computus, assigning Easter to the first Sunday in April or to the Sunday nearest the 7th of April. Some even wish to put every Sunday to a certain date of the month, e.g. beginning with New Year's always on a Sunday, etc. [See L. Günther, "Zeitschrift Weltall" (1903); Sandhage and P. Dueren in "Pastor bonus" (Trier, 1906); C. Tondini, "L'Italia e la questione del Calendario" (Florence, 1905).]

From “The Catholic Encyclopedia (1917).
Posted by Young Catholic Adults at 12:36 No comments: