The Traditional Mass Returns to Cheltenham 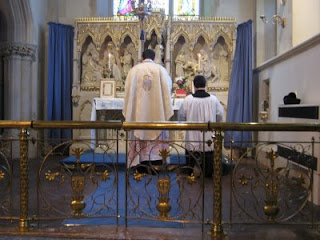 For the first time since the since the liturgical changes the Traditional Mass has returned to Cheltenham Spa a leafy regency town in the centre of England. On 9th August 2008 Fr. Smith celebrated his first public Traditional Mass with 100 people present, which was a very large congregation for a Low Mass at 11.30 on a Saturday! This was followed up with another Low Mass on August 23rd. It is hoped that these Extraordinary Masses can continue to be celebrated every 2nd Saturday.
Posted by Young Catholic Adults at 15:06 No comments:

This is an interesting quote from the recent Juventutem activities at World Youth Day in Australia.

On Thursday 10th July, Bishop Peter Elliot, Auxiliary Bishop of Melbourne, offered a pontifical high Mass in Melbourne and again one week later in Sydney where he also gave a catechesis. Answering a question on Sacred Sriptures, Bishop Elliot suggested an interesting parable. He said the Holy Bible is like a family album, each of its books describing members of the same family. He went on saying that if a boy from the house next door were to creep in the house, steal the album and open it at home; he and his relatives would not be able to identify the pictures and the relationships between the persons in the book, simply because they are not from the family. Bishop Elliot said that, as evident from the Acts of Apostles, the Church already existed and functioned institutionally before the canon of Scriptures would be defined. He concluded by saying that only the (Roman Catholic) Church therefore is endowed with indefectible assistance from the Holy Spirit so as to interpret infallibly the Holy Scriptures, because the persons and events described in these books simply are “her family”. Bishop Elliot is a convert from Anglicanism and has studied in England. He has worked many years at the pontifical Council of the Family and has written books on the liturgy.(Courtesy of http://www.juventutem.org/ )

Posted by Young Catholic Adults at 13:04 No comments: 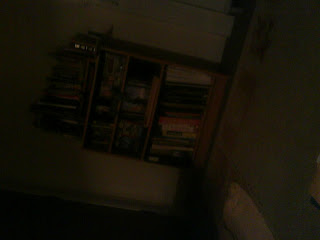 An Extraordinary Weekend at Douai Abbey 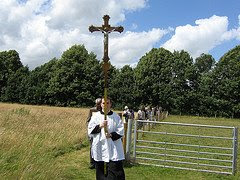 The Young Catholic Adults (YCA) retreat at Douai was fully booked this year and proved to be the most successful to date. It was led by Br. Christopher Greener the Guestmaster of the Abbey. The accommodation in the Bl Hugh Faringdon and St Alban Roe buildings was excellent, and much improved from previous years.
Fifty People Join in the First Marian Procession in Recent Memory 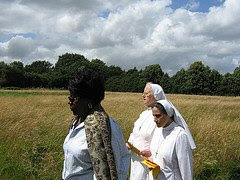 On the afternoon of Saturday 5th July at 2.30pm, YCA organised a Marian Procession in the grounds of the Abbey. This was the first such event in recent years at Douai, and was made possible with the help of the organisation Our Lady Help of Christians. Fr. Abbot gave a blessing and joined in with approximately fifty other people, including many clergy and religious. Everyone loved the event, including one of the resident monks who said that this was his first Catholic Procession ever.
The rest of the weekend involved saying the Rosary, attending Vespers (in Latin), a talk on St. Benedict given by Br. Greener and having social time in the evenings. Feedback was overwhelmingly positive, with other guests commenting about how nice it was to hear younger people praying the Rosary.
Monsignor Conlon Celebrated Mass 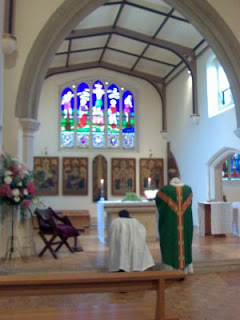 On Sunday 6th July, almost one year on from the Motu Proprio Summorum Pontificum, the Traditional Mass returned to Douai Abbey for only the second time since the liturgical changes. Monsignor Conlon (despite and incredibly busy weekend) celebrated Low Mass (the Eighth Sunday after Pentecost) in the Parish Church of Our Lady – which is adjacent to the Abbey. Some on this retreat had never been to a Traditional Mass, (there were also two Anglicans in the group) and so Monsignor very kindly an excellent and informative talk about the positive benefits of the extraordinary form of Mass and how the Pope wants the Old Rite to flourish once again in every Parish in the West. Again the comments afterwards were all positive – someone suggested that they would now like to start attending Latin Masses. The Mass was open to the public (not just retreatants) so afterwards some of the congregation thanked Monsignor Conlon for celebrating a Mass, which they had not seen for almost forty years.
The Abbey are keen to keep the event an annual one and have already invited YCA back for next year. Young Catholic Adults would like to wholeheartedly thank Fr. Abbot, Br. Greener and Monsignor Conlon for making this event a truly extraordinary success.
Posted by Young Catholic Adults at 11:26 No comments:

Young Catholic Adults get into the Catholic Herald 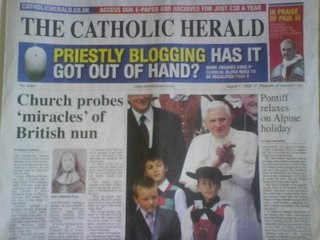 For the first time ever YCA (Young Catholic Adults) have managed to get a write up in the August 1st edition, in the Catholic Life section on page 6. 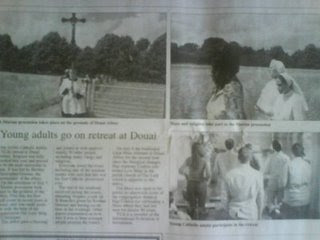 There was a good selection of photos of the Marian Procession on July 5th 2008!
Posted by Young Catholic Adults at 13:35 No comments: H/T to Rorate Coeli and the English speaking Juventutem WYD Blog
Posted by Young Catholic Adults at 12:09 No comments: Posted by Young Catholic Adults at 12:03 No comments: